The coroner unzips the body bag and sees the pale body of the small young woman. Her red hair burns against the stark white body bag. His eyes are immediately drawn to the large ligature marks around her neck. The cause of death: strangulation. The coroner starts the recording and begins snapping his photographs.

His gloved hands gently tilt her head and lift her limbs. He carefully removes the girl’s all white Chucks and socks, then places them in the evidence bag. Next, he removes her skirt and moves her body further up on the metal exam table. He cuts off her skirt. She has no bra on underneath and he notices her lovely pale breasts. The coroner cuts off her panties next, admiring her cute shaved kitty-cat.

The coroner props the girl’s head up on a prop block, then snaps some more photos of her naked corpse. She is so lovely and still, like a porcelain angel. Dark thoughts race in the back of his mind as her rotely works through his examination routine. A gloved hand moves through her hair as he shines a UV light over her cold flesh. He uses it to spy flecks of potential DNA evidence for collection.

Using a laser thermometer, the coroner takes the girl’s temperature to estimate the time of death. He takes scrapes from underneath her fingernails and toenails, to make sure that every evidential avenue is explored. The coroner takes her fingerprints and pulls out her little tongue with forceps to fully check her oral cavity. He shines a light in her pupils to check for dilation and burst capillaries indicative of strangulatory struggle.

Unsheathing a q-tip, he swabs the dead maiden’s tasty looking cunt. If the killer fucked her, either before or after death, there could be vital evidence within. The coroner pauses to fondle the girl’s tight pussy with a gloved hand. It’s so snug and soft. He could swear it’s still wet, inviting him. The coroner shakes the thoughts from his head and speaks more notes into his tape recorder.

With the post-mortem exam complete, the coroner’s mind shifts back to his guilty pleasure. He spins the sexy body around and pulls her to the edge of the exam table. Stepping between the corpse’s pale legs, he unzips his trousers and slides his already throbbing cock inside the tempting cadaver. The dead red-head lies still as the coroner plows her tight snatch.

The metal exam table rocks with each thrust; it’s clanking echoes of the brick and tile room. The coroner pulls the girl’s petite feet up closer to him and feels his balls slap off her cold little ass. Her dead pussy gushes with it’s final juices as the coroner’s balls tighten and his pace quickens. He pulls out and strokes his shaft with a gloved hand before shooting a spurting rope of cum all over the dead girl’s taught, pale tummy. He loves being the last person to enjoy these lovely fallen angels. It’s a dark pleasure that’s too delicious to resist. 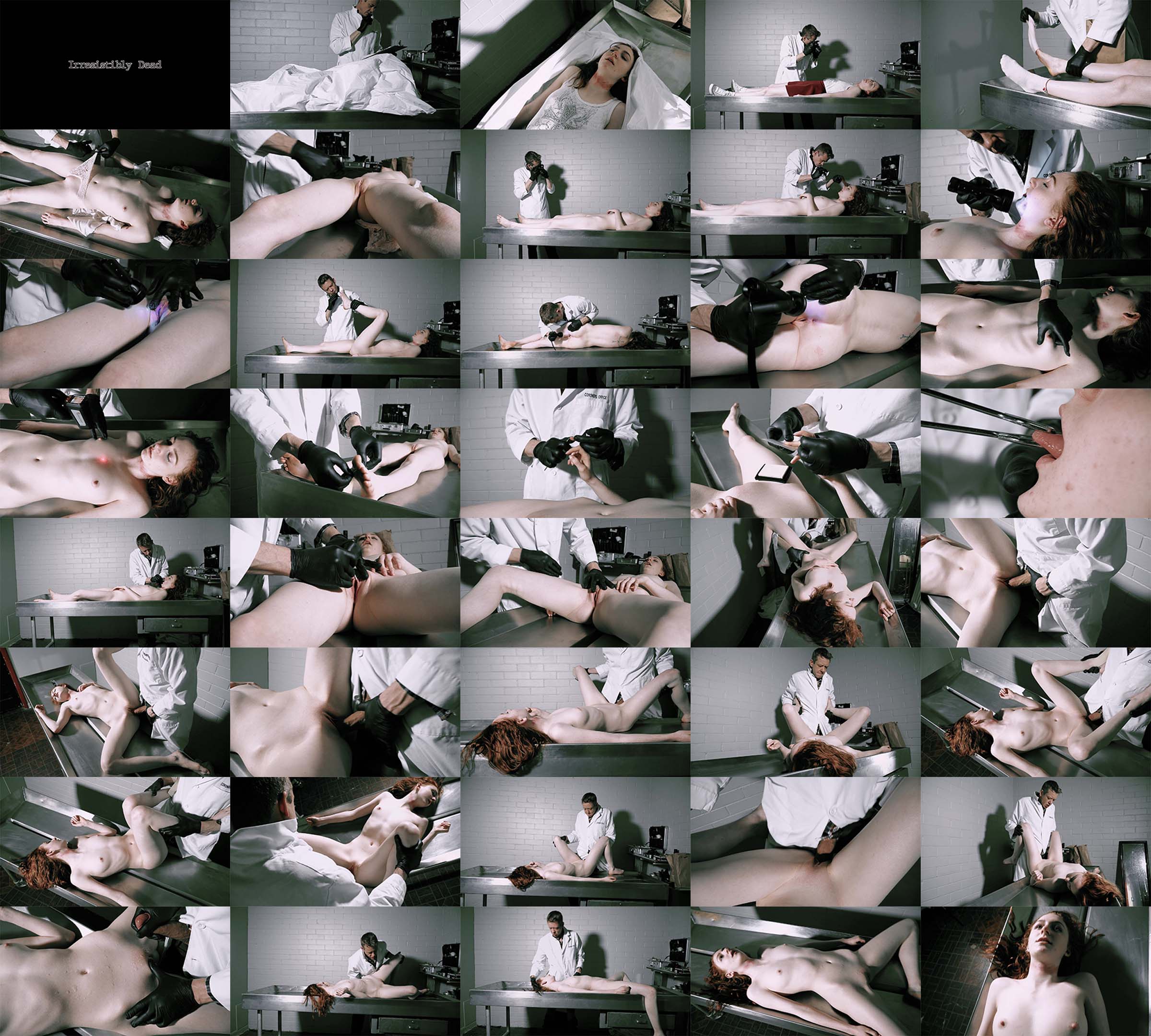 PURCHASE LINKS:
(Note:  You may have to turn of your ad-blocker or add a whitelist exception to see the link banners below.)